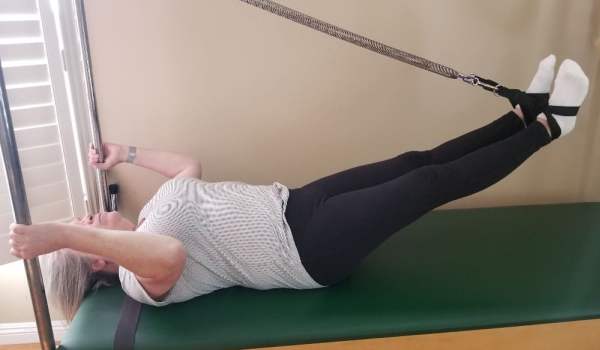 As a young woman of about 26, I began to suffer from crippling back pain. I had no idea what caused it, but all of a sudden, the pain was so sharp and crippling that I could barely walk. I ended up seeing chiropractors. Physical therapists, doctors and just about anyone who claimed they could fix back pain. The diagnosis was almost always over-training, and no one really had a good answer for me. This continued off and on for many years until one day I discovered Pilates.

I was teaching a range of fitness modules including step aerobics, water fitness and cycling. I tended to be a gentler and more cautious teacher due to the fact that I had been injured and I didn’t want anyone to go through what I was going through. At the time, I was also a freelance writer and I often wrote articles for fitness journals. One day, the idea of writing an article on Pilates came to me. I knew very little about Pilates, but I was open to learning. This was the late 90’s and at that time there were not nearly as many studios or teachers in the United States as there are today. I interviewed the owner of the only Pilates studio in Charlotte, NC and I immediately fell in love with the method. I then began my own personal journey of learning the Pilates method.

Now 20 years later, I have my own studio and I practice Pilates regularly. My back pain is gone and when I do get the occasional spasm, I know what to do. 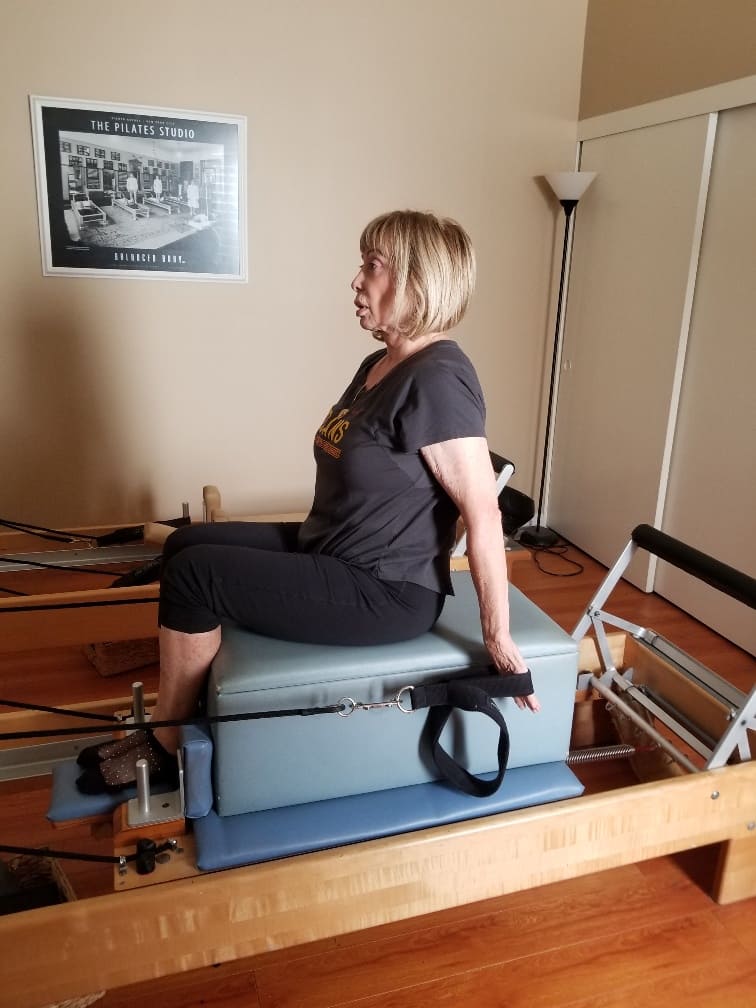 I have had great success working with clients with back pain. Everybody’s pain is unique and how we deal with it is also very personal. By working with clients and finding which movements may cause the pain and which movements help to relieve it, we can put together a program. In larger group classes it is nearly impossible to fix everyone’s back pain with the same series of exercises.

Back pain can result from many causes including aging, poor posture, old injuries etc. Trying to address and fix the problem involves doing a series of movements on the various pieces of Pilates equipment and then finding a program that the client can do at home. The client and I then decide how many Pilates sessions a week the client should do taking into consideration time, money and availability. I always give daily homework which can be done in just a few minutes.

Back pain is extremely common these days and given our lifestyle with cell phones, computers and commuting by car, it is getting to be even more common. Even people as young as 15 or 16 suffer from extreme back pain. It’s no longer the disease of old people.

I swear by Pilates as I feel as if it saved me from a life of back pain. My goal in life is to help others find relief from back pain through the Pilates method.

(and not the kind that requires boxes)

I have been teaching all kinds of fitness since 1992. It all began after my youngest daughter was born and I was at a play group with other young moms. At the time, I was living in Taiwan and had many friends who, like me. were living there as ex-pats(foreigners working in a country outside their own). A Japanese mother asked me how I stayed managed to stay in shape and when I told her I just did exercise she then asked, ‘Why don’t you teach us what you know?” And that is exactly how I got started. For several years I taught a variety of fitness classes to people from all over the world.

We returned to the States in 1997, where I began to teach all sorts of fitness including step aerobics, Spinning, aqua fitness etc. About two years later, I decided to exclusively teach Pilates and went into training. I felt that Pilates more than any other kind of fitness was beneficial to everyone. I also felt that I had been doing something sort of like it all along.

So now it has been 26 years since I went to that fateful playgroup and was talked into to teaching exercise to the other ex-pat women in our group. Since that time I have learned that exercise is simply good for you in more than one way. The best thing to treat minor aches and pains, depression, sluggishness, weak muscles, tightness etc. is some sort of exercise program.

Now it gets interesting. What is a good exercise program? The answer is: It depends. As a fitness professional who has worked with over 1000 people over the years, I get that question at least once a week. I have yet to change my answer. It depends. It depends on many factors such as your schedule, your current fitness level, where you live, your finances and most importantly, what you like to do. No matter where you live or how much disposable income you have, if you don’t like doing something you ain’t gonna keep doing it.

As a Pilates instructor, I tend to get people who were turned off to exercise early on or never really enjoyed jumping out of bed and onto the treadmill at 5 am. Some tell me that they have never once in their lives had the urge to work-out. Yet they still came to me for Pilates thinking that maybe just maybe this will be something they would enjoy. Most of the time they do. The movement helps them to conquer chronic aches, pains and tightness while it does wonders for depression and anxiety. One client came to me about a year ago claiming that not only did she hate to exercise, but everything she tried made matters worse. Walking, stretching, weights, swimming – none of it helped. I told her if we could just get her to move more than before then she would probably feel a lot better. I kept her routine simple and manageable. I was right. She still hated to exercise, but at least she admitted that moving more made her feel a whole lot better.

To conclude, it’s healthier to move than not to. For those who don’t bounce out of bed at 5 am for a 10 mile run followed by 90 minutes of hot yoga, try gentle stretches and a nice paced walk. Take the stairs. Park further away from the entrance. Find something you love doing, make it a part of your routine and just get moving.

Try your first Pilates session at Ab-solutely Pilates – a private home studio nestled in the heart of Huntington Beach CA.

There are as many forms of exercise these days as there are flavors of ice cream. That may be an exaggeration, but not by much. When I was a kid, exercise was pretty straight forward: You went to gym class, ran around the neighborhood with your friends and rode your bike just about everywhere. Now it’s a bit more complicated than that. First of all, most adults don’t run around the neighborhood (maybe they do, but that’s another topic) and exercise has to be fit into very tight schedules. People are busy with work, family, social activities etc. Most people don’t have a lot of time to just exercise. So for that reason, exercise needs to be productive.

So what makes for that perfect work-out? In all fairness, there really isn’t just one ‘perfect’ way to work-out nor are results instantaneous (wouldn’t that be nice?) A person has to really like what they are doing or they won’t stick with it. Most people also want to see some results and that means not only looking better, but feeling better too. A great work-out would include some cardio, strength training and flexibility exercises. It should also be varied and fun and be adapted to the level of expertise as well as the body type of the participant. In other words, the work-out would be individually designed for the participant. Now that’s pretty darn perfect. 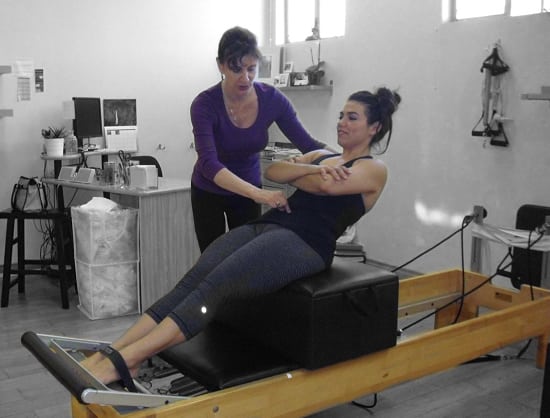 So why Pilates? I tell my clients that Pilates has both strength training and stretching along with a big dose of body awareness that helps the client with many other activities.

Pilates is also one of the best anti-aging work-outs there is. Nothing ages a person more than poor posture. Botox is nice, but great posture is even better.

There isn’t really a perfect work-out, but Pilates comes closer than anything else.

Try your first Pilates session at Ab-solutely Pilates – a private home studio nestled in the heart of Huntington Beach CA.

Get Started with Pilates

My Posture and Balance Have Improved

I have worked with Devra for several years. her classes are fun and she personalizes the exercises to each student. With her help, I’ve gained strength, and improved both my posture and balance. Absolutely Pilates is the best.

Pilates is a great exercise for my chronic low back pain and since it helped me, I have referred many of my patients to Devra. The most important thing is that it’s an awesome form of exercise to help with the stubborn ‘menopause pooch’.

All Pilates sessions are by apointment only.
Please view our current offerings: